As one of the most widely used connection methods in wind power equipment, high-strength wind power bolt and nut connection has the advantages of simple construction, disassembly and replacement, good stress and fatigue resistance. The domestic high strength bolt connection construction method generally adopts the torque method. At present, most of the domestic mainstream wind turbines are imported from foreign countries, so the tightening torque and tightening method are basically in accordance with the design requirements of foreign countries. However, in the construction process, we found that the failure of the bolts is mainly due to the plastic rheology caused by excessive external force extrusion, which can be regarded as screwing It is caused by excessive tightening torque.
Through hole size of installation bolt when high strength wind power bolt is connected with through-hole of connector:
High strength fasteners should be connected by bolt nut (bolt connection pair) (one bolt, one nut and two washers). In general, the bolt size and through hole diameter adopt medium assembly under tension condition; when the assembly accuracy is required to be high, the precision assembly is adopted.

Through hole tolerance and chamfering: fine assembly series, hole tolerance is H12; medium assembly series, hole tolerance is H13. In order to avoid the interference between the through hole edge and the fillet under the bolt head, it is recommended that the through hole edge be chamfered by 45 ° and the chamfer depth should be suitable for the fillet under the bolt head. For the bolt connection pair of wind turbine, the washer must be used, and the inner hole on one side of the washer must be chamfered.
The arc angle of the transition between the nut head of high-strength wind power bolt and the polished rod may be installed eccentrically without inner chamfered washer or without washer. The arc angle of bolt interferes with the right angle side, resulting in unreliable installation. At the same time, when the bolt is tightened, indentation is generated at the arc angle (bolt installation will also produce deflection), resulting in stress concentration under the load, and the bolt head is easy to be installed Fracture occurred. 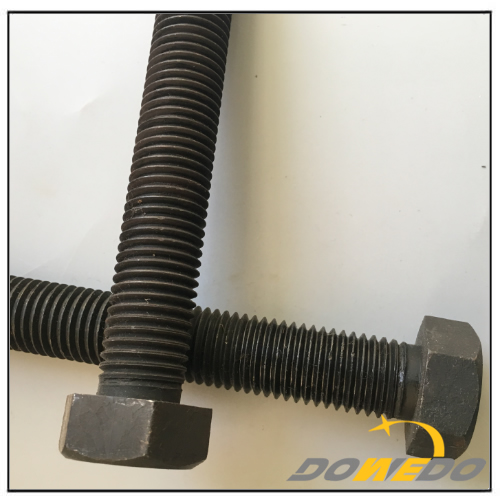 F436M Structural Heavy Hex Bolts A bolt is a form of threaded fastener with an external male thread. Bolts are thus closely related to, and often confused with, screws. A hex cap screw is a cap screw with a hexagonal head, designed to be driven by a wrench (spanner). An ASME B18.2.1 compliant cap screw […]